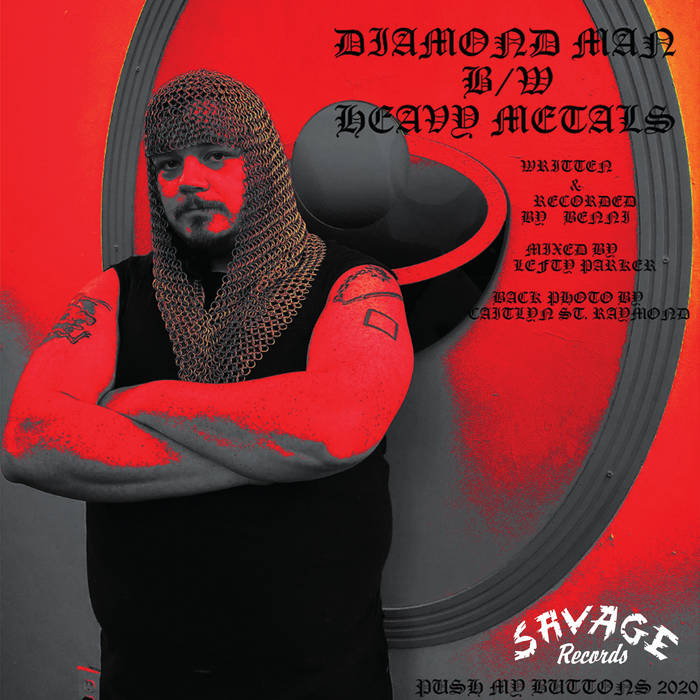 BÊNNÍ, the retro electronic artist who spoke with 360°Sound last month, has just released a new single on the Stockholm, Sweden label Savage Records. The A-side is “Diamond Man” and the B-side is “Heavy Metals.”

“Everyone seems to like ‘Diamond Man,'” BÊNNÍ said of the new track, which he has been performing live for some time. With its driving synth line, it’s one of his fastest songs and features talk-box vocals. “I wanted to do a longer disco song in the vein of Sparks’s ‘Tryouts For The Race,'” a track from Sparks’s classic 1979 album No. 1 in Heaven. “I kept having this recurring thought about some sort of humanoid made entirely out of diamonds that kept saying ‘this is who I am, the Diamond Man.’ I get a lot of weird intrusive thoughts that get stuck in my head and repeated over and over.”

BÊNNÍ lives in New Orleans, but he has a dedicated fan base in Scandinavia. “I’ve toured over there twice and my best shows are in Denmark and Sweden,” he reports. Thomas Savage, owner of Savage Records and Push My Buttons record store in Stockholm, told me he has known BÊNNÍ for years and has booked shows for him in Stockholm. He mentioned that BÊNNÍ should have a 7-inch to sell “And it just took off from there,” Savage told me. “I love BÊNNÍ’s mix of garage-y John Carpenter-ish music. It was easy to say ‘yes’ and put it out.”

BÊNNÍ describes the B-side, “Heavy Metals,” as him “trying to sound like Giorgio Moroder on the Cat People soundtrack, but with a robot voice.”

He said he sees “Diamond Man” as a teaser for his forthcoming third LP, which will likely feature a longer version of the song. “I’ve had a lot of people asking me what album that song is on for a year now. I can finally tell them it’s a single out on Savage Records.”

Savage Records have pressed 300 copies of the 7-inch vinyl. It can be purchased online at the link below and will also be available at Goner Records in Memphis and Euclid Records in New Orleans. Savage and BÊNNÍ discussed doing a Scandinavian tour in the spring, but those plans are on hold for the moment.

Click here to stream “Diamond Man,” order the 7-inch, or download it as a high-quality MP3 or FLAC file.