I was 14 and in eighth grade on 10 February 1978 when Van Halen’s debut album devastated an unsuspecting world. The Bee Gees were at the top of the charts and Billy Joel’s The Stranger was my favorite record. With the bomb-drop intro of “Runnin’ With the Devil” and the whammy bar dive-bomb of “Eruption,” Van Halen declared war on the status quo. 42.5 years later I was equally devastated by the news of Edward Lodewijk Van Halen’s passing.

I wasn’t listening to rock when Hendrix and the other great guitar heroes of the late 60s and early 70s were laying it down – I heard that amazing stuff later. That was someone else’s to experience as it happened. Eddie was playing for me and my crew, like our cool older brother. This was a new kind of rock, inspired by the early stuff, but taking it on a potentially-dangerous thrill ride. And we were hearing it in real time. I heard it first on W4 rock radio in Detroit, then my neighbor was jamming the cassette out of his Trans Am the next day. It was totally bitchin’.

Several years later, I was in high school when the band released Diver Down and hit the road to party and promote the new record (mostly to party). At great expense, my friend Moe and I managed to score front row seats for one of the shows at Cobo Arena in Detroit. This was by far the biggest concert of my life and I was super stoked for the show. I put our tickets on the windowsill above the sink in the kitchen so I would see them as often as possible.

One night that summer, I had a few friends over when my father was away on business. Moe brought some younger guys along who were a year behind us. I wasn’t friends with these guys, and frankly never really liked them. We hung out mostly in the kitchen and drank some beers. It was no big deal. The next morning I got up and went down to the kitchen to grab a bowl of cereal. I went to the windowsill to touch the tickets and they were gone. They were fucking gone!

I knew immediately that those rat bastards Moe had brought by had stolen our tickets, but there was no way to prove it and even less chance of ever getting them back. It was my bad for not putting them away, but I had only expected a couple close friends to be there. Like when local bullies had stolen my bike and trashed it up in the hills behind our house, I felt violated. The twin powers of rage and disappointment overwhelmed me. We never got to the bottom of it and we didn’t see the show. I never really got over it. 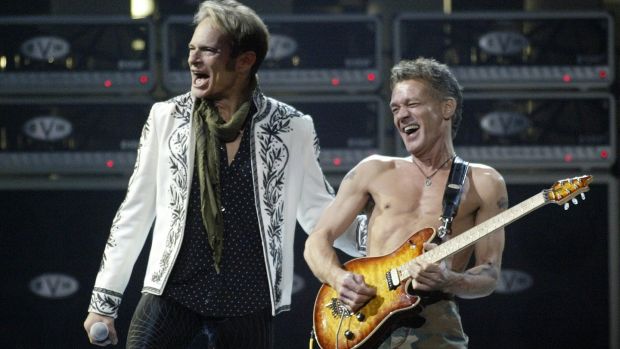 I did catch VH in Detroit in ’07 when they reunited with David Lee Roth, albeit not in the front row. But in the back of my mind I always planned to pony up for front-row seats on one of their reunion tours, to right that egregious wrong and restore balance to my rock ‘n’ roll life.

I never did pop for that front-row seat. I was always going to do it next time. Now I can’t. Writing this and tasting the lingering anger from my youth and the regret of the missed opportunity, it’s sinking in that Eddie is really gone. He’s not going to drag that titanium hip out on the road one more time. I never met the man (or saw him up close), but he’s been a part of my entire adult life. Something much more significant than concert tickets is missing now. Godspeed, Meneer Van Halen.