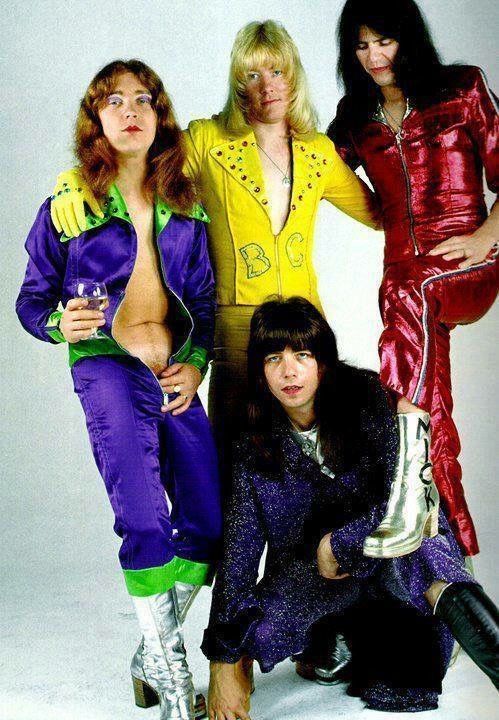 The Sweet (known in the States as, Sweet), were the bad boys of English pop in the ’70s. The band had an impressive run in the British charts as a big singles group and then, for several records anyway, their hit-making talents rubbed off in the States as well. Sporting coiffed shoulder-length hair and flamboyant costumes, they were standouts on the glitter-rock scene.

Back in the late ’80s, my mates and I were hanging out in my dad’s basement partying and listening to WRIF 101 FM rock radio in Detroit. They were doing a “3-for-all weekend,” during which they’d play three songs from a particular artist, “commercial free.” I actually got through to the request line, and called up three from The Sweet. It was the actual DJ, and he was like, “Don’t know if I can get to that, but how about three in a row from Queen?” Uh, ok. Sure. I guess that’s how it works, I make a request and you tell me what you already programmed, then tack on a dedication. Great.

Not that I’m not a Queen fan, mind you, but I had my Sweet 3fer locked & loaded. Over 30 years later, I still think this mini-set would make great radio:

My older sister had this 45, and it’s the first harder-rock song that I remember digging. A little more dangerous than the Bay City Rollers, and it kicked off with an irresistible drum hook. My inner child still hears, “And the girl in the corner set fire on Milwaukee.”

All right, let’s keep it going! Strap on some platform shoes and stomp along to this glam-rock march. I was ready for them this time and jammed right along with CKLW Windsor, Canadian AM radio. Let’s bring back referring to an attractive person as a “fox.”

Fashion was changing and The Sweet dialed back the glam for a more disco-influenced look, as this clip from the TV program Disco attests. But this is no disco-dance party, rather an evolved sound featuring a passionate introspective section. But mostly the guitar riff does it for me.