You may be familiar with “The Long Tail.” It’s an economic observation made by Chris Anderson of Wired magazine and popularized in a Wired article and a book of the same name. The theory can be applied to the jukebox route in a couple of ways.

Anderson observes that in the new digital economy, as you move out to the right on the horizontal axis of the demand curve demand drops off sharply and quickly, but demand still exists for the less popular products. Therefore, if you can find a way to collect that demand into one place — aggregate it — you can be profitable selling a few units of many items as opposed to selling many units of only a few items.

It’s an interesting observation and we find an excellent example of it in the jukebox industry. In his book, Anderson shares a conversation he had with Robbie Vann-Adibe, former CEO of eCast, the digital music provider. Vann-Adibe pointed out that Internet-based digital jukeboxes challenge the notion of the 80/20 rule, where 20% of the songs in a jukebox generate 80% of its revenue. He shocked Anderson by telling him that, in the previous quarter, 98% of the songs in the eCast catalogue had been downloaded at least once. Pretty amazing. With server space quite inexpensive, the cost of carrying all that inventory is extremely low. Therefore, it costs eCast very little to give hundreds of thousands of songs a chance to find an audience. And the aggregate of each one of those individual plays adds up to significant increases in profit for operators. 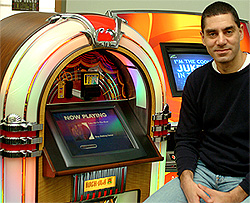 Another way that the Long Tail applies to the jukebox route involves the CD jukebox. Anderson opines that in the digital economy we are moving from a “hit” mentality to a “niche” mentality. Currently, the digital jukebox is the hit. Operators are seeing quite astonishing increases in their cash box when they switch to digital jukes. The niches are out in the Long Tail. There are still tens of thousands of locations where the economics of the digital jukebox don’t make sense. When you drop below the “A” locations in the route hierarchy, giving up 20% of the cash box off the top monthly for music (along with all the other constraints of having a third partner) becomes a much bigger deal. The CD jukebox keeps the operator independent, which is why most of us got into this business in the first place. And the CD format isn’t going away any time soon; don’t forget that it is a digital format. The 100 slots in a CD box can hold over 2000 songs, which allows the CD juke to fit nicely into the digital music revolution.

So roll your CD jukeboxes out into the Long Tail — and keep more of what you earn!