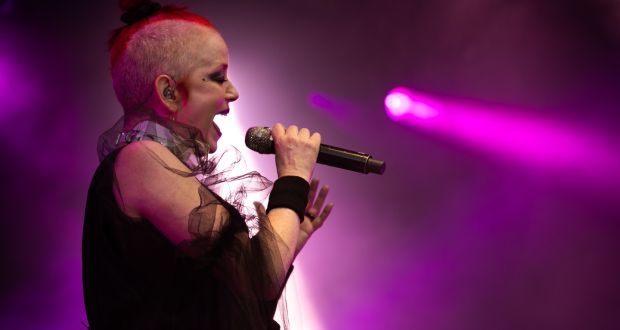 I had the term “hair band” redefined for me at a Garbage rock-and-roll show.  It happened at The Joint at the Hard Rock Hotel in Las Vegas. The Joint is a large show room, but Shirley Manson and her colleagues had been playing arenas, so the gig had a very intimate vibe. We were hanging in the middle of the crowd, and there were some women up front waving a sign at Shirley. She acknowledged them, but kept shaking them off. In between songs the group grew increasingly insistent. I couldn’t see their sign, but it was clear that, even though Shirley appeared to know these fans, she was not into whatever was on the sign.

She eventually stopped and looked at them and motioned to one of them to come up on stage. It turned out this woman was a long-time fan whom Shirley had met at previous shows. Shirley sheepishly announced to the crowd that the woman had cancer and that she was starting chemotherapy the following week. The woman’s sign read, “Shirley… shave my head!”

The woman handed Shirley an electric razor and Shirley paused to address the audience again. She told us how she has a really intense phobia about hair. A hair in her food can make her violently ill, and she gets queasy even if there’s a hair on the back of the seat in front of her on a plane. I completely got what she was saying. She was visibly uncomfortable and seemed a little shaky.

They brought a stool out for the woman, and Shirley shaved her head. While Butch and the boys played some “head-shaving music,” hair tumbled gently past the woman’s shoulders and onto Shirley’s skirt and legs and gathered in a pile at her feet.

She got the woman down to “#2 clipper length” and wished her well. The crowd roared approval as the woman fist-pumped and leaped off the stage into the arms of the supportive mosh.

I’ve dug Garbage from the moment I heard “I’m Only Happy When it Rains” on 89X (the now former ‘cutting edge of rock’) out of Windsor, Ontario in ’95. But since that night at The Joint I’ve developed a fondness and respect for Shirley Manson, because of her depth of character. Oh yeah… and her hair.

Here’s a clip from that show at The Joint in aught-five. Our girl may have had a wee dram or two, and she shared with us her favorite “American word.” Reminds me of the tale of the late legendary Detroit mayor Coleman Young visiting Japan. When told that many Japanese words have a different meaning depending upon inflection, Hizzoner allegedly replied, “Yeah, we’ve got words like that in English. Like, ‘motherfucker.'”

She proceeded to take a request for a song she couldn’t remember and had to bring out the motherfucking lyric binder. They had a go at an impromptu version of “Wicked Ways,” but she conceded, “No, we’re not going to do that, cuz we don’t know how that one goes.” Then they butchered “Silence is Golden,” and then Shirley just fucked off the whole request thing.

Finally, “Why Do You Love Me” from their then-new album Bleed Like Me was a highlight on that tour. Here’s a great-sounding clip from Germany or somewhere that features Shirley serenading a blow-up doll. The doll appears not to have required shaving.

Here’s friend of the site Paul A’s audio capture of the whole Vegas show on YouTube.

Check out their great live version of “The Trick is to Keep Breathing” from our recent list of songs about breathing:

Don’t forget to give Shirley’s podcast The Jump a try. Each chat is under a half hour, primarily with other musicians like George Clinton, Liz Phair, Sharon Van Etten, Courtney Love and many more. Shirley’s a great host and always leaves me wanting more. It’s available on most major podcast platforms.