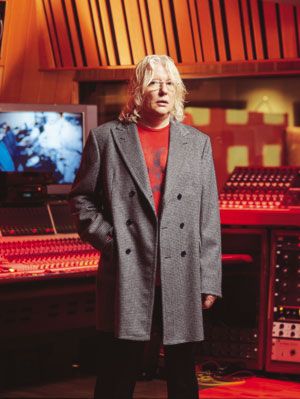 When Roy Thomas Baker was the age that I was when I started discovering RTB-produced records, RTB was producing records. That’s right, at 14 years old. Bloody hell, the man’s had a truly remarkable career as an audio engineer & producer and A&R guy. He started as an apprentice at Decca records in the early 60s and rode the baby boom into the genex and right up to whatever the fuck is going on now. It’s still a thrill for any band to work with Roy Thomas Baker. Scott Lucas of Local H said of 1998’s RTB-produced Pack Up the Cats, “I think Roy was primarily the reason anybody wanted to work on that record.” The result is always heavy, saturated and rocking.

RTB produced many of my favorite records at the dawning of my rock fandom — from Queen’s Night at the Opera & Jazz, to The Cars & Candy-O. I wore the grooves off the vinyl spinning his stuff and I wore the words off the sleeves reading the liner notes. RTB productions are top-shelf.

So what’s our favorite RTB-produced album? We performed a bit of Rocktology! to figure it out. A distinguished panel chose 16 of RTB’s most beloved productions based upon no particular criteria. We don’t claim to have heard everything the man’s done, but these are 16 essential albums, featuring music that matters deeply to a lot of us. You can check the full bracket with results below.

In the top half of the bracket, there was much intrigue. In round 1, Local H’s Pack Up the Cats got a fair amount of love and it looked like they might give The Cars’s Shake It Up an upset run. But that potential upset fizzled, and the big upset turned out to be Queen’s first album taking down my favorite Journey album, Infinity. It looked like Queen was going to continue their Cinderella run by upsetting The Cars’s Candy-O in their round 2 matchup. However, a clock malfunction gave Candy-O new life, and it gave Cars Nation an opportunity to discover voting by leaving a comment on this post (yes, we do include those votes). Candy-O brought out the razor lights and pulled out the buzzer-beater to join Night at the Opera, a pre-tournament favorite, in the Final 4.

The bottom half of the bracket featured a round 1 nail-biter, as Foreigner’s Head Games (honestly the last album included in this field) led The Cars’s first album for a significant stretch, but The Cars hit the accelerator late to secure the win. The Cars was another early favorite to take the title, but narrowly escaped the scrap heap again in round 2 at the hands of Queen’s Sheer Heart Attack. Jouney’s Evolution dealt with The Cars’s Panorama and then pulled the upset of this half of the bracket, surprising Queen’s Jazz to make the Final 4.

Evolution’s title hopes became extinct when they couldn’t adapt to The Cars high-octane style. And with Cars Nation fully engaged, Candy-O blew Night at the Opera off the line and never looked back. The Cars went on to dominate the internecine title matchup with Candy-O and took the checkered flag. Congrats to the electric angel rock and rollers! The Cars took this one convincingly and also won Rocktology’s top American bands full-field tournament last spring. I see an automotive trend developing…

Thanks to the legendary Roy Thomas Baker (who for the record had nothing to do with this).  RTB lent a ton of Twitter support and seemed to appreciate the spirit of the thing. Follow him @RoyThomasBaker. Thanks and ever thanks to all who participated in the polls, especially those who voted by leaving a comment below. In conclusion, I’m not ashamed to say that this is just what I needed.