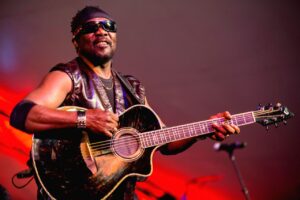 Reggae legend Frederick “Toots” Hibbert died Sept. 11, 2020 at the age of 77. The soulful frontman of Toots & the Maytals wrote and recorded numerous ska and reggae classics, including “Pressure Drop,” “54-46 Was My Number,” and “Monkey Man.” Hibbert is even credited with coining the term reggae with the 1968 single “Do The Reggay.” The Maytals had two tracks on the seminal soundtrack to the 1972 film The Harder They Come, which was huge in introducing reggae to the world.

In addition to being a talented songwriter and dynamite performer, Hibbert was a skilled song interpreter. One of The Maytal’s biggest hits was a cover of John Denver’s “Take Me Home, Country Road.” And on the standout 1988 solo album Toots In Memphis, recorded with Jim Dickinson at Ardent Studio, Hibbert tore through Memphis soul classics, including Otis Redding’s “Dreams to Remember” and Al Green’s “Love and Happiness.” The final Toots & the Maytals album, Got to Be Tough, was released in late August, just two weeks before Hibbert’s death.

“You’ve got Bob Marley who really put reggae on the world map, but there’s something about Toots Hibbert,” Baker said. “There’s a crossover aspect to him that I think no other artist really gets that far and wide as he does.”

As rocksteady began evolving into reggae in the late ‘60s, Hibbert was on the forefront. Baker said Hibbert had a more uptempo feel to his music than a lot of the Rastafarian roots reggae of the ‘70s. He cited The Maytals’ “Funky Kingston” as an example of a reggae song that doesn’t sound like the stereotypical sound people associate with the genre.

“He’s got such a wide and divergent spread of stuff that I think a lot of people will find something that they’d enjoy out of his catalog,” Baker said.

Jimi Watusi, singer-songwriter and keyboardist of the Texas-based reggae and worldbeat group Watusi, said all the reggae greats, including Hibbert, Bob Marley, Peter Tosh, Dennis Brown and others, brought something unique to the genre.

“Toots brought soul to the party,” he said.

Watusi has covered “54-46 Was My Number,” a surefire crowd-pleaser, many times over years.

“I didn’t purposely learn a lot of his songs to do, but I know it changed the way I did a lot of songs that I did – the sound, the vibe, the upbeat party. Once you take an R&B song and turn it reggae, you have to be hearing [Hibbert] when you do it.”

Art Baker had the pleasure of seeing Hibbert live once in the ‘90s. “I can confirm his stage presence is everything that everybody says it was,” he said. “He was absolutely energetic and on fire at all times.”

“It’s kind of trite to say, ‘there will never be another one like him,’ but there really really won’t. Nobody really had that kind of energy. And the number of people I’ve seen who’ve been talking about him and how much they’re gonna miss him, clearly this is not lip service, they really do mean it.”