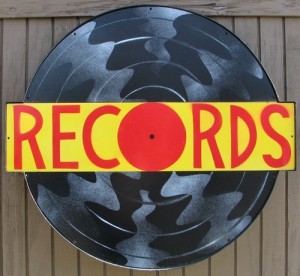 I went to Hello, Records during my lunch hour today. It is one of a handful of used records stores in and around Detroit that consistently score and make available records that are usually only found on the Internet sites. Great jazz, soul, reggae and rock titles for prices well below those that are sent through Paypal. Shhhhhh . . .

I first checked the walls where the better offerings are displayed. I spotted a glossy John Coltrane, Ballads. It was a mono and appeared in very nice shape. It was an original press — very exciting! An original mono Ballads can bring $500 on the internet, and Wade was only asking $35.00. I inspected the deadwax in hopes of seeing the VAN GELDER imprint. Instead, I found the Bell Sound script. Some prefer the Bell Sound mix to Rudy Van Gelder’s. But I find the Van Gelder cache irresistible. Plus, I already own a Bell Sound stereo on the orange and black label. I surrender the record back to the wall and some other collector.

I turn to the rock wall and spot a very fresh looking Bowie, Space
Oddity. It’s the later RCA press, not a preferred Man of Words Mercury. It’s a black label Dynaflex in great shape. It’s coming home with me. I then look up and spot Crocodiles, Echo & The Bunneymen’s remarkable first release. The strangely lit cover photo takes me back to the 80s. A strange decade for popular music. To me, this record stood out because it sounded more like a modern version of the Doors. I’m grabbing this one, too.

It’s no secret that vinyl is back. With Record Store Day approaching on April 20, 2013 it’s time to start getting your fingers warmed up to flip through the bins. And grab a coffee, cause you’ll be waiting in line a while to grab all the cool limited RSD releases.