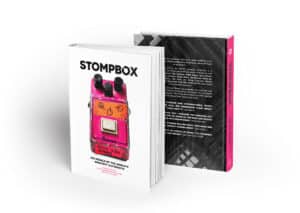 Brooklyn-based photographer Eilon Paz spoke with 360°Sound about his two new books on guitar effects pedals, Stompbox: 100 Pedals of the World’s Greatest Guitarists and Vintage & Rarities: 333 Cool, Crazy and Hard to Find Guitar Pedals (both are available now). Paz’s photography work has appeared in the New York Times, Rolling Stone, The Observer, among many other publications. His 2014 book, Dust & Grooves: Adventures in Record Collecting, has sold more than 25,000 copies and is in its third edition.

Stompbox showcases 100 different effects pedals – everything from distortion and delay to flanger and wah – used by guitarists Stevie Ray Vaughan, Frank Zappa, Jimi Hendrix, Alex Lifeson, Lita Ford, Joe Perry, and many others. More than a photo book, Stompbox contains interviews with the guitarists and five features on pedal-related topics. The companion book Vintage & Rarities features rare pedals from 25 collectors from all over the world.

This interview has been edited and condensed. All photos by & courtesy of Eilon Paz. Click the images to enlarge them.

360°: Please start by telling us about how the idea for Stompbox came about. 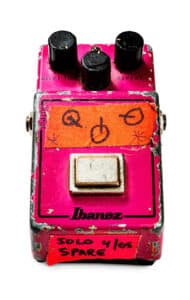 Eilon Paz: When I finished Dust & Grooves, I was looking for another long book project that would take me four years to complete [laughs]. I was basically trying to find similarities between the new project and what I’ve done with Dust & Grooves. First of all, a project that is music-related, and then something that has to do with a lot of visuals. Also, subject matter that is backed by a strong community, and I think Stompbox fit the exact bill.

A lot of people collect pedals, just like people collect vinyl. I think also when it comes to the tangibility to it, it has a lot of similarities. People who use pedals and not just digital plugins, I think they have the same state of mind as vinyl collectors. One of the last criteria was something that was never done before. There were quite a few books about guitars and great guitarists and photobooks. There were books about pedals, but they were reference books. There was no illustrated book about it.

Even though pedals are an important part of a guitarist’s gear, do you feel like they get overlooked?

Everybody sees the guitar. The guitar is always out there in the spotlight. Everybody knows all the players, but you’d be surprised how many people don’t even know what guitar pedals are for, what’s the purpose, and how to operate them. When I’m trying to explain this to people who are not familiar with pedals, I say that pedals for musicians are like spices to a chef.

I was really drawn to pedals as objects that represent eras in design and artwork. You can really kind of experience the road that these pedals went through by all the wear and tear on them. That was another really important element for Stompbox. An unbroken rule is that the pedals need to come from the artist themselves, they need to choose their favorite pedal, it’s their pedal that they’ve always used. The reason that it took me so long to pursue this is that it was me trying to stick to the concept. Some artists we chased for more than two years to get their approval and get the interview with them and then to get the pedal itself.

I found the book to be accessible and not too technical. 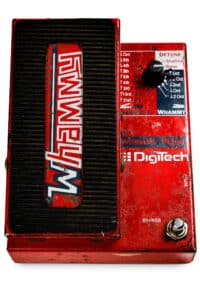 Totally, that was the main idea behind it. I didn’t want it to be another technical book. I came up with the idea and I funded the whole thing, but I didn’t do any of the writing. I had the vision, the drive, and the responsibility for this project. The first thing that I did was gather a good team behind me, so the editors, Dan Epstein and James Rotondi, they were kind of the backbone of this project when it comes to the editorial content. We agreed that this needs to be accessible to not just guitar nerds or pedal nerds.

The main idea was to give personal testimonials from the players themselves on how these boxes help them shape their sound and their identity. Of course, there needs to be some sort of technical accuracy and details, which are included as well. In the body of the interview, we tried to focus on more like their experience, their philosophy about music, or even like some backstage, unseen and unheard stories from their career, which is always fun.

Do any guitarists come to mind who have a distinct sound that’s attributed to a particular pedal? I imagine you came across that a lot. 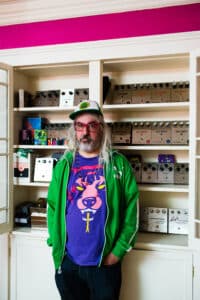 Yes, of course. When I was pitching the book to people and showing them what I was doing, I had this postcard with a whammy pedal, like a red beat-up whammy pedal. Everybody knew that this is Tom Morello’s whammy; this is his sound. In his case, that was the most prominent case of identified sound. Also, [Dinosaur Jr. frontman] J Mascis would be the Big Muff. He has this huge collection of Big Muffs as well. He has this obsession with them, which is chronicled in the book.

Do you have a favorite pedal?

Not really. I can tell you that I have favorite photos of the pedals because I don’t relate to them as a musician. I relate to them as a visual artist. I was looking for beat-up and used pedals that show the history of the artist. For example, the pedal on the cover, it’s [Sonic Youth guitarist] Lee Ranaldo’s analog delay. That probably is my favorite photo. First of all, it was one of the first ones that we ever did, but also it was exactly what I was looking for. It has all these markings, and you’d be amazed at how many people recognize his markings. The wear of it, the rust, it’s kind of the perfect example of what I wanted to achieve. 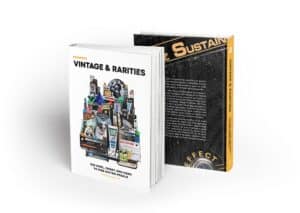 Tell us a little about the other book, Vintage & Rarities.

The main idea was to get these 100 pedals from 100 guitarists, and we’ve been working on this for four years. Somewhere in the third year, on one of my trips to L.A. to photograph these pedals, I realized that I’ve been encountering all these other pedals. For example, when I went to see [Queens of the Stone Age guitarist] Troy Van Leeuwen, I went to photograph one of his favorite pedals, which was nothing special really. But around it were hundreds of pedals and some of them were super rare. That was the case in a lot of instances. The first idea was to create a feature in the Stompbox book about pedal collectors and rare pedals. But then it grew further and developed into a whole separate book. 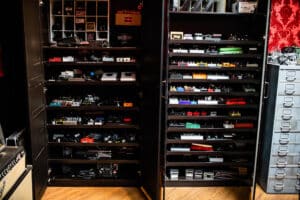 We managed to establish a good network of collectors and it was kind of easy to do it because when you’re talking to collectors, they’re happy to show you their collection, unlike some guitarists who are busy or don’t really want to bother. We managed to pull Vintage & Rarities together in record time. In like six months we finished the entire book. It features 333 pedals, most of them are super rare and the others are just odd or one-offs or just fun. I can guarantee you that some of them were never seen before.

To order a copy of Stompbox and Vintage & Rarities, click here.