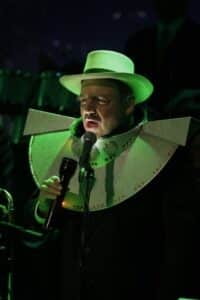 In the year 2000, amid the Napster lawsuits, release of The Beatles’ 1 comp, and Santana’s nine-Grammy haul for Supernatural, there was no shortage of one-hit wonders. Over 30 artists notched their one and only hit in 2000. [360°Sound’s definition of a one-hit wonder is an artist who has had just one Top 40 hit in the Billboard Hot 100].

At the turn of the century, *NSYNC and Backstreet Boys were at their commercial peak. (Click here to read our interview with boy band expert Maria Sherman). CD sales hit an all-time high in 2000, and *NSYNC’s No Strings Attached sold a jaw-dropping 2.4 million copies in the first week. *NSYNC and Backstreet Boys inspired a plethora of second- and third-tier boy bands (one of whom is featured on this list).

Pop-rock and pop-punk were huge in 2000. Wheatus’s “Teenage Dirtbag” and SR-71’s “Right Now” both made their only appearance on the pop charts in 2000, the former selling 5 million copies. Blink-1982 are even technically a one-hit wonder, as 2000’s “All The Small Things” is their sole Top 40 hit.

Nu-metal was the most popular form of hard rock. The year saw the release of Papa Roach’s Infest, The Disturbed’s The Sickness and the mega-seller Hybrid Theory by Linkin Park (Click here to read our 20th anniversary feature on Hybrid Theory). Dirty South rap music was big, as was Eurodance; this list includes several club bangers in these styles.

Get out your pacifier and glow sticks as we roll out our picks for the greatest one-hit wonders of the year 2000.

Sonique – “It Feels So Good”

Initially released in 1998, “It Feels So Good” became an international hit for British singer/DJ Sonique when it was re-released in the spring of 2000. BuzzFeed ranked the song #33 in their list of “The 101 Greatest Dance Songs Of the ‘90s.”

“It’s about this guy whom I really liked years ago, but who didn’t return my feelings,” Sonique told The Hindu. “He was very successful, and I wasn’t — at that time. And he thought that I was in love with his success. This song is just a way of declaring that it was him I liked.”

504 Boyz were a Dirty South hip-hop group from New Orleans led by Master P, head of the label No Limit Records. The ode to ass-shakin’, which incorporates a NOLA bounce music beat, features six rappers in addition to Master P, including Silkk the Shocker, Mystikal and C-Murder.

Twin sisters Erica and Tina Atkins of the duo Mary Mary gave their offering with the R&B-laced gospel crossover smash “Shackles (Praise You).” A Top 10 R&B hit, “Shackles,” was featured on their second, Grammy-winning album Thankful.

“I try to say goodbye and I choke…try to walk away and I stumble…” It seemed like you couldn’t go anywhere in 2000 without hearing that chorus from the raspy-voiced Macy Gray. Since her debut album On How Life Is, Gray has released nine studio albums and had several R&B hit singles, most recently 2018’s “Sugar Daddy.”

Alice DeeJay is a dance project created by several Dutch DJs. “Better Off Alone,” from their only LP Who Needs Guitars Anyway?, is a simple song with an unforgettable synth hook that comprised many a Nokia brick phone ringtone in the early 2000s. The entirety of the lyrics: Do you think you’re better off alone/Talk to me/Ooooooh talk to me. According to a 2017 in-depth algorithmic analysis of Hot 100 hits by a computer scientist, “Better Off Alone” is the most lyrically repetitive hit of the decade.

An R&B duo consisting of David “Davinch” Chance and Dante “Chi” Jordan, Ruff Endz hail from Baltimore and got their name from their struggles in landing a record deal. They toiled in obscurity for years before their velvety smooth vocals caught the ear of Epic executives. The highlight of “No More,” which topped the R&B charts, is its earworm chorus: “No more shopping spreeeees…no more late night creeeeeps.”

soulDecision, a boy band from Vancouver who wrote their own songs and played instruments, shot to No. 1 in Canada with the funky, disco-y “Faded.” They had several more hits in their native country but never charted again in the US.

Not gonna lie, I think this song is annoying as hell. But it’s been blasted in sports arenas all over the world, so it’s worthy of a mention. Plus, “Who Let The Dogs Out” has a fascinating, conflict-ridden backstory, detailed in the outstanding 2019 documentary of the same name. (Click here to read our exclusive interview with “Who Let The Dogs Out” expert Ben Sisto).

Enjoy our roundup of 2000 one-hitters? The journey through one-hit-wonderdom will continue in 2021. Stay tuned!