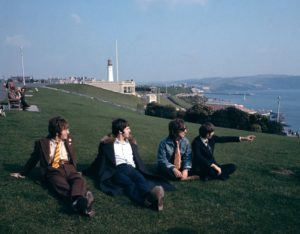 The Beatles. Have you heard of these guys? Four cheeky Brits from Liverpool? Had a pretty nice run in the 60s as performers and recording artists. I was born about a month before the lads first came to the US, so I have only vague recollections of the Beatles when they were still together. For me, I learned about the Beatles and became a fan when they were former Beatles, each enjoying quite successful careers as solo artists. Truth be told, I was a Wings fan before I was a Beatles fan.

Some older kids that I walked to school with had all kinds of posters of post-Beatles John, with long hair and iconic round spectacles (and Yoko), post-Beatles George with mustache and Indian garb, post-Beatles Paul on stage with Linda, Denny Laine and Wings, and post-Beatles Ringo in psychedelic suits. These kids still played Beatle records, but they spun ex-Beatle solo wax in equal proportion.

Much has been written and debated about which Beatle had the more successful solo career. George came out strong with All Things Must Pass, an aptly-titled three-record collection of great songs he amassed while getting maybe only one song on any Beatle record. John, with songs like “Imagine,” established himself “in his own write” and became a cultural icon taken tragically by an assassin’s bullet at the age of 40. Paul formed Wings, in addition to his own solo stuff, and has had the most chart and sales success through the years. Ringo has continued to spread “peace & love,” hitting the road regularly with his All Star Band.

For our part, we restricted our deciding factor to chart-topping singles. Collectively, the former Beatles have had sixteen #1 singles as solo artists. Paul has nine of those hits, George had three, John had two and Ringo has two. It only made sense to bring in some outside opinions via a Rocktology! mini bracket tourney. We had some very lively polls and we thank all who participated. Once again, a special shout-out to @TheHookRocks for much-appreciated support. You can review the matchups with full results below. The first round was everybody against Paul, which is kind of how the whole Beatle thing ended, so it seemed appropriate. 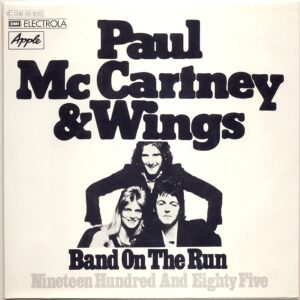 In the top half of the bracket, George’s “My Sweet Lord/Isn’t it a Pity?” (a double A side) received much love (Hare, Hare), easily levitating to the Final 4. Controversy swirled in round 1, as Paul’s “Silly Love Songs” appeared to have eliminated John’s “Starting Over” by a fraction of 1% after 266 votes in the Twitter poll. However, there was support for John in the comments to the original version of this post. The judges ruled to advance “Starting Over” to round 2, overruling Paul’s narrow Twitter victory. One judge who wasn’t authorized to speak on the record did indicate that the panel couldn’t Imagine a second round without John, and they figured whichever song won would get steamrolled by “My Sweet Lord” anyway, so it didn’t matter. Unfair enough. By the way, John did go on to lose to George by 49%.

In the bottom half of the bracket, Paul’s “Band on the Run” made it out of there to the Final 4 and subsequently took down “My Sweet Lord” to earn the title as our fave former Fab Four solo #1 single. So dominant was Macca that, for the first time in the storied history of Rocktology!, he skunked himself in round 1 (“Band on the Run” 100%, “Ebony & Ivory” 0%). Congratulations to Sir Paul and this classic Wings track. Listen… the bells are ringing in the village square.