(Leo is a jazz head, an audiophile and a vinyl maven. If it’s on Blue Note, he probably has a copy.)

“You need to take risks, you never know if the end results will be beautiful or strange, you need to be instantaneous, listening to every moment, without missing a scrap of the music.”
-Brian Blade, drummer

Daniel Dufour is an Austin-based drummer. He assembled a trio featuring bassist Sam Pankey and guitarist Jordan Burchill to record this collection of American jazz standards. This format has been executed to perfection by the likes of Grant Green, Kenny Burrell, and Gabor Szabo, but these are fresh takes with a particularly Texas approach.

I live in Detroit, but I have great appreciation for Texas music tradition, particularly artists like Ornette Coleman, Townes Van Zant, Willie Nelson, Roky Erickson and Bob Wills. The common threads I hear between those artists and these guys are expanse and journey – an open-road feel and progression. There is a strong sense of place and movement in Texas music.

The album opens with an original composition, but then gets right into the standards with Kern and Hammerstein’s “All The Things You Are.” The lyrics, though not performed, seem to hold the key to the song and its inclusion on this record:

Time and time again I’ve longed for adventure
Something to make my heart beat the faster
What did I long for, I never really knew…

Pankey’s bass starts the tune, stepping in slowly, cautiously hinting at the melody throughout his extended introduction. Once the other players enter, the tune gives way to Burchill’s exploratory guitar until it finds its groove and brings the famous chorus into focus, and finally to an abrupt end.

Mancini and Mercer’s “Moon River” begins with guitar and drums adeptly introducing the familiar chorus. This rendition remains faithful to the original, until near the end when the band pushes the pace and concludes with a drone and march. Where many versions of this tune end in wistful resignation, Dufour’s ends with a restless urge to begin. A great addition to the catalog of one of the most covered songs in history.

“Nardis” is a highlight of this collection. Written and first performed by Miles Davis during his modal period, this composition is primarily remembered for Bill Evans’ recording (and repeated reworking). Pankey and Burchill bring toughness and conviction to the tune, and Dufour adds dramatic shades and curious textures, simultaneously forceful and subtle. 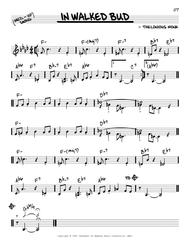 The trio show off their rock chops on the introduction to “In Walked Bud.” Thelonious Monk wrote this tune as a tribute to his friend, pianist Bud Powell. Monk incorporated chord changes from Irving Berlin’s “Blue Skies,” a western swing and country standard. The notion of “nothing but bluebirds all day long” combined with the light rockabilly interpretation complements the unique Texas feel of this album.

Dizzy Gillespie’s “Con Alma” is performed faithfully by all, until the end when a shimmering phased and looped guitar takes the tune in a decidedly non-standard direction. This sets up the album’s closer, “Spherule,” a rock-infused original that ends the record on an optimistic note. This journey’s not over.

More than the sum of its estimable parts, Standards is clearly a group effort in which Dufour, Pankey, and Burchill listen intently to each other and respond. Ornette Coleman introduced jazz to the concept of responsive improvisation. This trio applies that concept brilliantly on this recording, keeping their approach fresh and unpredictable. This is a road trip full of dark mystery, sweet surprises and the promise of discovery.

Stream Daniel Dufour’s Standards on Apple Music, Amazon and Spotify. Or you can buy a copy of the CD right here on 360°Sound.