A Toast to Evelyn ‘Champagne’ King 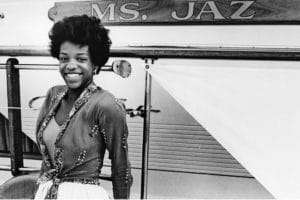 The R&B singer/songwriter/producer turns 60 today. Despite placing 14 singles in the R&B Top 20 in the 70s and 80s, I feel like King is under-appreciated. To many, I think she’s an “I know the song but not the artist” type. For those who aren’t familiar with Ms. King and her body of work, it’s my pleasure to introduce you.

Born in the Bronx, King moved to R&B hotspot Philadelphia in the early 70s. At age 14, she would accompany her janitorial-engineer mother to work at Sigma Sound Studios, where tons of Philly soul hits were cut for Kenny Gamble and Leon Huff’s legendary Philadelphia International Records. One day, young Evelyn was vacuuming and singing Sam Cooke’s “A Change Is Gonna Come,” and her soulful pipes caught the ear of producer T. Life.

“Just being singled out by them hearing me, that was like a Cinderella story,” King told SF Weekly in 2018. “I was 14 when I got discovered. I was 15 going on 16 when I started touring.”

King signed a production deal with Life and a recording contract with RCA. The first single released from King’s 1977 debut album Smooth Talk was “Dancin’ Dancin’ Dancin’.” But it was the million-seller “Shame” from Smooth Talk that launched her career.

“The Mike Douglas, Merv Griffin and Dinah Shore shows were looking for me when I had to do their shows,” King told the Los Angeles Sentinel in 2011. “I’m standing right in front of them all scrawny and skinny with a soft voice saying, ‘I’m right here.’ Of course, they were expecting a 300-pound woman, and it’s because I sing from the gut.”

King was inducted into the Philadelphia Walk of Fame last year. “I love singing and I love performing, and I’m going to keep dropping it like it’s hot,” King told KYW-TV in Philly. “It’s all about what I love, and what I love is what God gave me and that’s a voice.”

Let’s celebrate that powerful voice on her 60th birthday with six of my favorite Evelyn “Champagne” King singles:

“Shame,” King’s signature song, is a perfect dance tune and a bona fide disco classic. I challenge you to listen and not tap your feet. Disco grooves do not get any better than this.

Like many disco tracks, the pulsating melody line starts immediately, as if the needle was dropped in the middle of the song, and goes right into the chorus. The funky Nile Rodgers-esque guitar riffs, bubbly bass line, smooth sax and killer bridge (“Back in your arms is where I want to beeeee”) lead back to that unforgettable chorus.

The follow-up to “Shame” went gold, and it’s another perfect pop song. “Shame” and “I Don’t Know If It’s Right” were skillfully remixed by Al Garrison and David Todd for the single versions, both of which are much funkier than the original LP cuts. I love how the bass on this track is way forward in the mix (That’s the mad chops of Raymond Earl of the disco band Instant Funk.). And while I typically prefer the 12-inch mixes (because I don’t want the tasty groove to end!), I’ve featured the 7-inch version; I like how it cuts to the chase.

The title track of her fourth album was written by multi-instrumentalist Kashif, another underappreciated artist who, along with Stevie Wonder, was influential in the use of synths and MIDI technology in R&B music in the 80s. This is the title track from her fourth album, and it marked a pivot from straight disco, which was out of style by the start of the 80s. In addition to bringing in producers Kashif and Morrie Brown, King started to sing in a higher register with I’m In Love.

“I’m in Love” is a classic example of “post-disco” with its lack of strings and horns and an emphasis on keyboards and synths. Music critic Rashod Ollison wrote in The Virginian-Pilot that the sound of 80s urban-pop arguably began with this track. So smooth and funky — that beat is unstoppable.

Perhaps King’s second best-known song, this was another successful collaboration with Kashif and Brown. A dance floor pleaser, it was the first single from her excellent fifth album Get Loose and her second hit to top both the R&B and dance charts.

In 1983, a reggae cover by Barry Biggs hit the top-five in the Netherlands. And in 1994, Alison Limerick, best known for her club anthem “Where Love Lives,” notched a top 40 hit in the UK with her house cover of this track.

This smooth delight should have been a hit from Get Loose; it still sounds fresh and groovy today. But after the success of “Love Come Down,” RCA chose to push “Betcha She Don’t Love You,” which admittedly did peak at #2 on the R&B charts. “Back to Love” seems to set the blueprint for the contemporary smooth pop that dominated the mainstream charts throughout the 80s. Listening today, it’s hard to imagine that Madonna didn’t just completely rip her down-tempo stuff directly from tracks like this.

Yet another catchy and danceable hit, this track was the highlight from her regrettably subpar 1985 release A Long Time Coming. I’ve featured the dance-mix version, which I prefer to the album cut.

Hope you enjoy these “Champagne” classics to toast this great artist’s 60th. While King hasn’t released an album since 2008’s Open Book, she still performs. Here’s hoping we get a chance to see her live soon in a post-COVID world.